So You're Shooting Film at a Wedding for the First Time 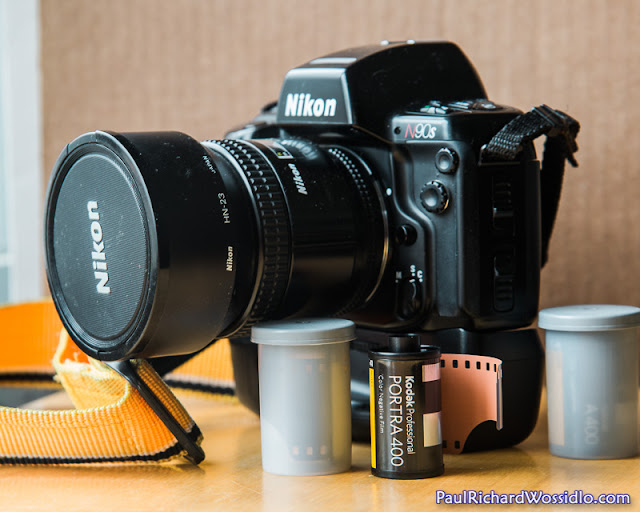 Come to find out, film is making a comeback, just like vinyl records.  Not just for artists and students, but for mainstream wedding and portrait photographers.  Unfortunately, digital cameras have been around long enough that some newer photographers have NEVER shot film.  Here are some tips I've put together, based on the 20 years I shot film at weddings before switching to digital in 2004.  These tips assume you're using a 35mm film body that is compatible with your digital cameras and lenses.


You have to shoot the entire roll at the same ISO.  I know, I know, this one is obvious, especially if you've shot film before you switched to digital.  But the question does get asked by newer photographers who have only shot digital.  You can't switch ISO between shots.  In the pre-digital era, I would have my "regular" film (ISO 100 or 400) in one camera body, and "high speed" (ISO 800) film loaded in a second body.  If you only have one film body, I would recommend using versatile ISO 400 film.  If there isn't enough light for ISO 400, switch to your digital camera.

Always carry a spare roll in your pocket. It is one of those Murphy's Law type of things that you will always hit the end of the roll right before something important, and always when your are not near your camera bag.  One time I totally misjudged how many shots I would take of the processional, and hit the end of the roll just as the bride was about to come down the aisle.  I immediately walked towards the back of the church, and put my hand up in front of my chest in a "stop" motion.  The bride saw it, and yanked her dad back.  Once I knew they were stopped, I pulled out the film from my pocket, dropped to my knees and changed the film in 7 seconds (and this was with a manual rewind crank and having to thread the new film leader into a slot on the takeup reel).  If I hadn't had a spare roll on me, I would have been dead.

Use your digital camera to check your shots.  Back before digital, there was a thing called Polaroid Instant Film.  A lot of photographers would have a Polaroid back for their medium-format camera or view camera.  There was even one enterprising New York camera repairman who developed a Polaroid back for the Nikon F3 pro 35mm camera.  After you took a photo, you would pull the film out of the holder by an exposed tab, and in a minute or less you had a 2 1/4 x 3 1/4 inch print.  The Polaroids were used to check lighting setups, composition, and exposure.  It wasn't a quick process, because you would have to wait 30 to 60 seconds for each Polaroid shot to develop.  Photographers wouldn't start shooting film until they were satisfied with the Polaroids.  Today you can do the same thing with your digital camera, and it is much faster and easier.  Plus, you'll have a digital backup copy of the image, just in case.

Always be aware of how many shots you have left on the roll.  When I switched to digital, one of the amazing things was the number of photos I could store on a single memory card.  With 35mm film, the most you will get is 36 photos per roll.  Compared to a memory card, that isn't a lot.  You need to anticipate how many shots you will shoot at the next item on the schedule, and make sure you have enough film left took cover it.  If you don't, you will likely have to change the roll before you get to the end.  There's nothing worse than taking the first three shots of the cake cutting (for example) and finding you're out of film and have to change rolls.

Don't forget to rewind the film before you open the camera back!  One big difference between film and digital is that you have to rewind the film back into the light-proof cartridge before you open the back of the camera and remove the cartridge.  Otherwise you'll ruin the film by exposing it to light.  It is one of the most sickening feelings in the world to open the camera back and see the film still on the takeup reel  (been there, done that...).  If you shut the back quickly, hopefully you will only lose the last 6 or so shots on the roll.

Know your equipment.  Film cameras are generally older than the digital cameras you are currently using.  In some ways this is good, because they will be simpler and easier to use than your digital cameras.  But they will be different.  Controls will be in different locations.  Then there is the whole issue of loading and unloading film.  Make sure you've shot some film beforehand, so you are familiar with how it is done.  You might have to change film in a hurry if you hit the end of the roll at the wrong time.  Ideally you should be able to do it in the dark...

Have a system for tracking your film.  Back in the day, Kodak plastic film canisters were opaque, so I used color-coded circular Avery labels to tell the films apart (yellow for color print film, white for B&W, red for Kodachrome, and blue for Ektachtrome).  Unused film had the label stuck on the lid.  When the film was loaded in the camera, the label was transferred to the back of the camera.  When the roll was finished, the sticker went on the bottom of the can, and I wrote a sequence number on it, so I could tell the order the rolls were shot.  Finally, all used film went in a ziplock bag to keep it together (so it didn't get lost) and separate from the fresh film.

Hope this helps.  If you have some tips of your own, feel free to leave them in the comments.  If I think up some more tips, there may eventually be a Part 2 to this article.
Posted by Paul Wossidlo at 1:45 PM