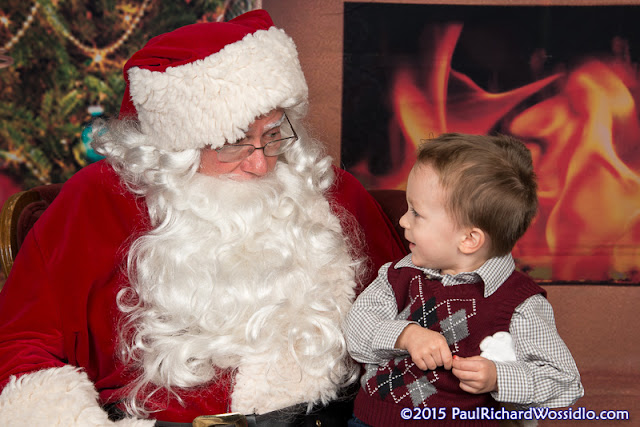 The first year I did these photos was 1983.  I worked at Bettis at the time, the Holiday Party was something new, and they decided it would be nice if every family would get a 4x6 print of their photo with Santa.  Since I was shooting film, my biggest concern was keeping track of which photos went to which employees.  I had a whole system of name cards, roll and frame numbers, and notations to keep things straight.  I needed two assistants just to keep the paperwork straight.  That first year, Santa and I were set up in one corner of the room.  About two hours into the day, I turned around and was shocked to see that the line of families waiting to see Santa wound around all four sides of the room, and almost back to where I was standing.  In the following years we added a numbering system to the name cards, with the numbers being announced in groups of 10, so no one had to stand in line too long.

Although there was a period when I took some time off, this is easily the longest running assignment I've had.  Long enough that for some of the children I'm photographing now, I also photographed their parents 20 or 30 years ago when THEY were kids.  For the last 13 years I've shot this with digital equipment.  With the advent of online galleries and social media, we no longer supply prints, but rather provide a digital file that parents can use as they wish.  They are in an online gallery for the parent to download, so it is no longer necessary to track the individual photos.  Overall, things are much more streamlined now.

I decided to try a few new wrinkles this year.  Rather than my previous years' setup of an on-camera flash mounted on a flash bracket, I decided to have two flashes firing into 33-inch white umbrellas, using the wireless trigger mounted on the camera.  The wireless trigger was the key to making this work, because I didn't want wires dangling where a child running around might trip on them.  This setup worked like a charm.  The lighting was very even, and the resulting images were very consistent, requiring a minimal amount of exposure correction from image to image.

The second change this year was to use the EyeFi card in the camera to send images directly to my iPad, so parents could get an idea what the images looked like.  This proved to be quite popular with parents, and gave them confidence that their kids looked good in the photos (other than the occasional screaming and crying toddler, of course...).

The photos can be found HERE.
Posted by Paul Wossidlo at 7:51 PM